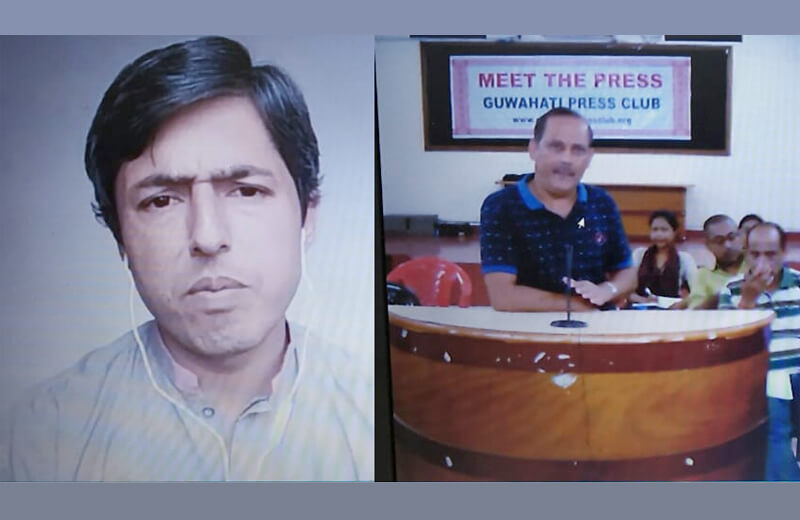 Guwahati: Leaving aside all differences, a Pakistan occupied Kashmir (PoK) based editor-journalist favours more people-to-people contact and exchange of ideas between all parts of Kashmir for greater regional understanding and meeting of minds.

Haris Qadeer, who used to edit the highest circulated Urdu daily newspaper published from Muzaffarabad, emphasized frequent contact and movement of journalists to give a correct picture from a conflict zone.

Interacting with Guwahati based scribes through the online medium on 28 September 2018, the young editor of Daily Mujadala, presently sealed by Pakistani authorities for one year now, also described various challenges in front of working journalists in the conflict zones.

Braving the odds, he called upon aspiring scribes to cultivate proper commitment and passion for the medium if they want to survive in the increasingly difficult profession. Qadeer, who now contributes news-features for some Pakistani media outlets, emphasized honesty to be pursued by every newsman.

While appreciating the vibrant Indian media, nurtured with constitutional safeguards, Qadeer expressed concern over restricted media freedom in Azad Kashmir (PoK). He commented that more people-to-people contact and exchange of ideas between different stake-holders could actually bring about peaceful resolutions to Kashmir.

He stated that most of the issues concerning nearly 4 million mostly Muslim populace of PoK are not highlighted in the media as the vernacular newspapers remain week and a majority of newspapers, circulated in PoK, are Kashmir editions of various Pakistan based media outlets. As for news channels, which are primarily cable operated and not DTH, there is zero visibility of any India based news channel in Azad Kashmir.

On the other hand, Qadeer added that the mainstream media of Pakistan remains reluctant to highlight the issues of PoK as the region is geographically and psychologically isolated. The entire PoK area suffers from lack of development. In particular, road infrastructure is poor, and there is no train connectivity, even today.

Moreover, there is no operational airport in the region as each has been occupied by defence personnel. So residents have to go to Lahore or Islamabad by road before they can proceed to other places (including foreign countries). As the healthcare situation in PoK is very poor, the more affluent people prefer to go elsewhere for treatment, he added.

Answering queries from Guwahati scribes about any change of perception after Imran Khan becomes the prime Minister of Pakistan, the editor commented that it is too early to get the impression. Qadeer however stated that the PoK residents would have little expectation from the new regime in Islamabad.

In another reference, he admitted that the Kashmir affairs minister in Islamabad seems to be more powerful than even the Prime Minister of PoK (presently Farooq Haider). However, he clarified that Pakistan military personnel are not visible inside PoK and internal security is fully maintained by local police forces.

Admitting the presence of Islamist fundamentalist elements in PoK, he pointed out that the growth of radical elements and terrorism has affected local aspirations for a greater Kashmir, which seemingly include PoK, Baltistan-Gilgit and Aksai Chin.

“In contrast to commonly-held belief in India, the people of PoK are neither in favour of Islamabad nor in support of New Delhi, rather they prefer to identify themselves as Kashmiri first,” Qadeer claimed. Speaking about the crisis facing journalists in conflict zones like PoK, he revealed his own story of that started with a survey report published in Daily Mujadala last year. The outcome of the survey was shocking as over 73% of respondents opted for freedom from Pakistan and eventually establishing an independent State of Kashmir.

Irritated Pakistani authorities promptly sealed his publication, which continues today and Qadeer sees little hope of changing the hearts of Islamabad based politicians along with Rawalpindi’s military officers soon.