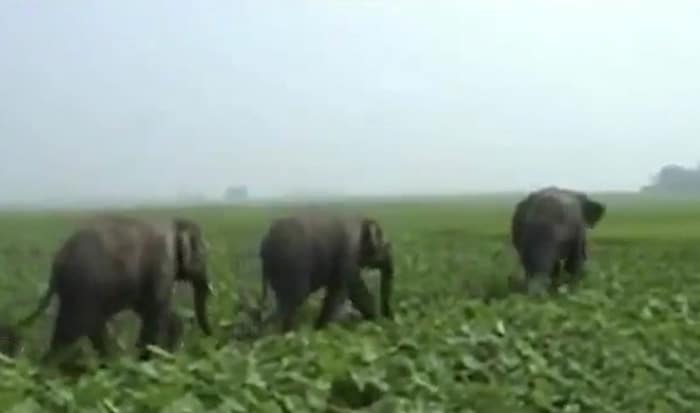 Diphu August 31: In the middle of a stepped up vigil by the forest department to prevent man-elephant conflict in West Karbi Anglong district, one injured wild elephant was shot dead at Karbi Rongchap village in the Donkamukam forest range yesterday morning.

According to information received from the villagers, they noticed an injured elephant lying on the fringe of the village around 7.30 AM. Some villagers immediately informed the range office and the officer responded by sending a veterinary surgeon and senior forest department officials.

After initial examination, the doctor confirmed that the elephant was hit by a bullet several months before, and was in distress due to the injury. The elephant starving as it couldn’t consume normal foodstuff.

Later, the forest staff buried the elephant near the place it fell down. Departmental officers retrieved a pair of tusks before burying the carcass.

In another incident, a herd of about 60 elephant destroyed 3 dwelling huts in Kolonga Rongmirdan village on Friday last. The herd ventured into the village from the nearby Kolonga reserve forest, and consumed 15 acres of sugarcane cultivation and 63 quintals of paddy stored in the granaries of three villagers.

The villagers were Samson Bey, Rajesh Rongphar and Kania Hansey. They showed extreme caution to avoid any clash with the ravenous elephants with the object of feeding on the stores.

At the time of filing this report, no authority has extended any help to the victims of the disaster caused by the elephant herd.