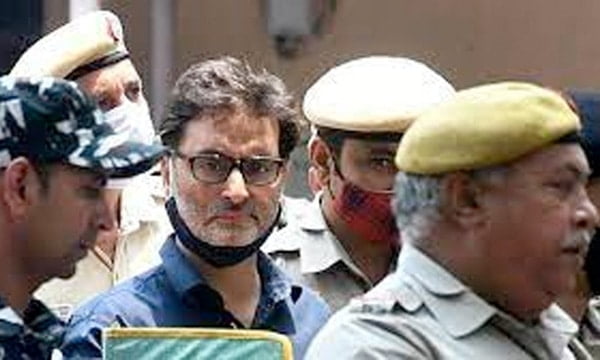 Washington, DC ( July 29, 2022) The World Kashmir Awareness Forum issued a statement in response to the hospitalization of the revered Kashmiri political leader and Chairman of the Jammu Kashmir Liberation Front Muhammad Yasin Malik.

“The news of Yasin Malik’s admission to Ram Manohar Lohia Hospital has set alarm bells ringing among millions of his followers in Jammu and Kashmir and around the world. Mr. Malik has been incarcerated in Tihar jail 7 in solitary confinement serving a life sentence on trumped up charges without a fair trial and proper legal representation. He has been defiant throughout his kangaroo court trial and decided to go on a hunger strike four days ago despite his chronic ill health and physical and psychological torture inflicted by the authorities in the jail. His frail health from decades of turmoil, torture and poor healthcare has taken a huge toll on Mr. Malik.

Kashmiris around the world deeply fear that Indian authorities plan to seek the demise of all political and human rights activists and leaders resisting illegal Indian occupation. They have a proven track record of causing death of Kashmiri leaders by any means, including life in prison just as is being contemplated in the case of Muhammad Yasin Malik.

Millions of his followers and people of conscience around the world are deeply concerned about Mr. Malik’s critical health status.

Kashmiris at home and the global Kashmiri diaspora community appeal to Ms. Michelle Bachelet, UN High Commissioner on Human Rights; and Mr. Antonio Guterres, the Secretary General of the United Nations to persuade Government of India to end the solitary confinement, inhumane and cruel treatment, including physical and psychological torture of Mr. Malik, which is share violation of the Article 5, 7 and 10 of the Universal Declaration of Human Rights.